It’s in the bag! Lessons learned from the Better Bag Challenge 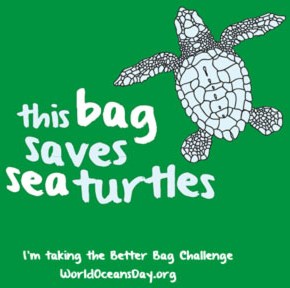 With kudos to the Houston Zoo, which provided the inspiration for what proved to be a very popular bag design!

For World Oceans Day 2015, we teamed with the Aquarium of the Bay, Shedd Aquarium, Vancouver Aquarium, and the Virginia Aquarium and Marine Science Center to test and assess various approaches to the Better Bag Challenge.

Our intent was to explore the ways in which we might effectively engage visitors on the issue of plastic pollution in our ocean, and inspire them to take action in honor of World Oceans Day, specifically by signing up for the Better Bag Challenge, which, as a reminder, was a pledge not to use disposable plastic shopping bags for one year. Thanks again to the Riverbanks Zoo, whose work under their Innovative Solutions Grant+ sparked the idea for the challenge!

At these four sites, visitors were offered a reusable shopping bag (Production cost: $1 each) in exchange for taking the challenge and agreeing to complete a short follow up survey, but, here’s the twist, each site came up with its own approach and messaging so we were able to compare and contrast experiences. And in addition to the coordinated effort undertaken at these four sites, we were excited to also receive feedback from similar outreach experiments at the North Carolina Aquarium at Fort Fisher, Oregon Coast Aquarium, SEA LIFE Centers and SeaWorld Parks and Entertainment.  Thanks all! 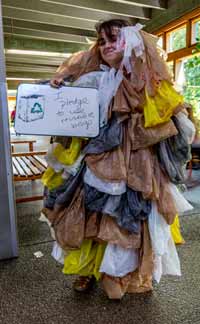 Again, we wouldn’t hang our proverbial hats on these survey findings, but they do suggest we were moving the needle in the right direction.

We expected a positive public response to the Better Bag Challenge, but if you would have told us that some sites would see 80 and 90 percent sign up rates I’m not sure we would have believed you.  Without doubt, visitors welcomed the chance to join us in taking action, and helping to solve the problems facing the animals and our ocean.

And while as visitor serving organizations we have spent a lot of time and energy wondering if our impact on guests is lasting, perhaps that isn’t the most pressing question.  If we see that people care about issues like plastic pollution, and are willing to sign on for action when inspired and, notably, asked to do so during their visit, perhaps we should worry less about whether their attention may fade when they return to their busy lives, and think more about how to bring their interests and actions to the attention of civic leaders and policymakers  - perhaps that is our next challenge?